Bunions are not just big toe joint problems. While bunions can be a problem by themselves, they can also cause other foot issues that can be as or more problematic than the bunion itself.

A bunion is a knobby, boney prominence on the inside of the big toe, which is due to abnormal positioning of the bones. The first component of a bunion is the boney prominence, and the other component is a deviated big toe that goes over towards the outside of the foot. The malalignment of the big toe joint can cause biomechanical shifts in the foot leading to abnormal pressure being placed on other areas of the foot, leading to new structural issues. Some of the problems will resolve should the bunion be treated and/or repaired with bunion surgery, and others may need specific intervention.

A hammer toe is the most common secondary problem that a bunion will cause. A hammer toe is a structural deformity where the toe becomes buckled and crooked. While any toe can become hammered, the second toe is most commonly affected. Bunions cause hammer toes in two situations. The first way a bunion will result in a hammer toe is when the big toe pushes against the 2nd toe. This crowding of the big toe causes biomechanical changes within the second toe, which may cause the toe to buckle. Over time, these abnormal forces may lead to ligament ruptures within the toe that lead to a permanent structural deformity. The second way a bunion causes a hammer toe is when the bunion is associated with increased flexibility of the arch, which transfers pressure onto the ball of the foot, causing ligament damage.

A crossover toe is a variation of (or more severe form of) hammer toe, where the 2nd toe loses its stability and actually crosses over the big toe. This condition develops slowly over time as an enlarging bunion with a significantly deviated big toe physically pushes the second toe up. Bunions that cause crossover toes are considered severe bunions.

Bunions are not just problems of the big toe joint; they are actually part of a global foot problem. A bunion may cause a flat foot when the bunion is associated with increased arch mobility (a condition called hypermobility). In this situation, the arch may collapse and result in a flat foot. Alternatively, some people with flat feet may develop bunions due to abnormal mechanics of the foot. Flat foot treatment may help the bunion from progressing.

Bunions can lead to excessive pressure transferred onto the ball of the foot, resulting in pain and inflammation, a condition called metatarsalgia. The metatarsal bones span the forefoot and make up the weightbearing area on the bottom of the foot behind the toes. Metatarsalgia caused from a bunion often improves or resolves should the bunion be treated.

Corns and calluses are a focal collection of skin, which develops from increased repetitive pressure. A bunion can cause increased pressure areas as it rubs against the inside of a shoe. Corns/calluses can form on the bunion itself and/or the ball of the foot. These thickened skin areas can be painful, especially when they become thick and cracked.

When the big toe is deviated and rotated, it may abnormally place pressure on the toenail, which may cause the nail to become ingrown and painful. Large bunions are more prone to ingrown toenails. Both toenail borders can be problematic depending on the severity of the bunion and/or the rotation of the big toe. 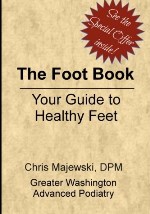 The Foot Book: Your Guide to Healthy Feet - Download the First Chapter For FreeRequest My eBook