A bunion is a bony prominence on the inside of the foot at the big toe joint. The same condition on the outside of the foot, at the base of the little toe, is sometimes called a tailor’s bunion or bunionette. 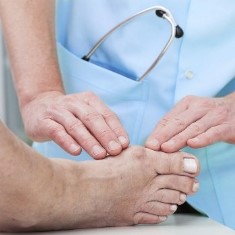 A bunionette is a visible deformity—an enlargement of the outer part of the joint. It results from the movement of the little toe inward toward the other toes. This can happen, for example, when tight shoes are worn. The pressure on the little toe caused by this crowding not only forces the toe inward, it puts pressure on the toe joint to move outward, where it presses and rubs against the shoe, eventually resulting in a bunionette.

What Are the Symptoms of a Bunion?

The bunion is a lump that is a visible deformity. Over time, this lump is subject to increased pressure and rubbing against the shoe, forming a callous. Eventually this can become irritated and painful, causing pain that makes walking and standing difficult. Corns may develop, and abnormalities may develop in the other toes as well. Finding shoes that one can stand to walk in can also be a challenge.

What Causes a Bunion?

Bunions are caused over time (even several years) by this abnormal pressure on the joint. As suggested previously, a major cause of a bunion is wearing shoes that are too tight and that tend to squeeze the toes together. Bunions are much more common in women than in men, but any shoes that are pointed, such as cowboy boots, can cause the condition. As one might suspect, bunions are uncommon in societies in which shoes are infrequently worn.

Contributing factors include type of occupation (such as a cowboy or ballet dancer) and birth defects or other medical conditions such as arthritis that may cause or contribute to abnormal foot motion. Heredity is a common cause.

From what has been said, there are two problems that may need treatment. You should seek the treatment of a qualified physician on the first sign of the development of a bunion. Bunions will not go away on their own.

Early treatment may include one or more of the following:

If these methods fail, surgery may be suggested. Basically, bunion surgery is to make feet fit shoes. The bunion itself is a painful deformity that can be removed through surgery. However, except in very mild cases, this may not be enough, since the structural deformity in the foot that caused the bunion is still present. In such cases, surgery to correct the structural problems may be performed. Such surgery may involve realignment of the bones of the foot, as well as the use of a joint implant. Full recovery may take up to eight weeks following surgery.